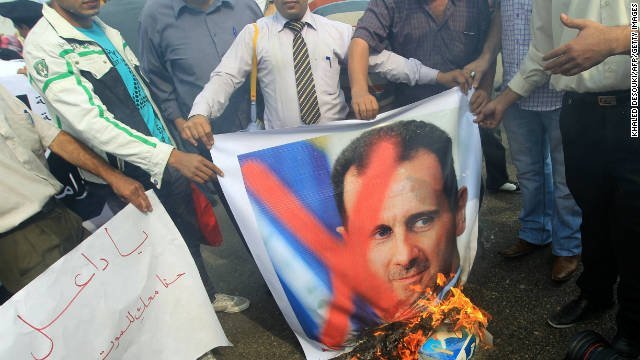 Assad must not get away with his crimes

November 6, 2015 8:32 am 0
The Arab Curse
When Squeezed, Assad Yields Acid
When the FSA Speaks, Assad Panics

Source: Al-Arabiya – by Khalaf Ahmad Al-Habtoor (Assad must not get away with his crimes)

Ancient cities and World Heritage sites across Syria have been turned into wastelands of blood-soaked rubble littered with infants’ shoes and toys. Almost 300,000 Syrians have been killed and 11 million displaced. If there is one person to blame for the four-year-long tragedy it is Bashar al-Assad, who instructed his army to slaughter his own citizens rather than heed his people’s call to step down. He put his chair before his country and he is responsible for the influx of terrorists.

Assad is the greatest war criminal of our time, and as long as he is in Russia’s embrace he can sleep soundly. He is assured of immunity because, firstly, Syria is not a member of the International Criminal Court (ICC) and, secondly, he is confident that the U.N. Security Council cannot refer him to The Hague thanks to Russia’s power of veto. Russia makes a mockery of international laws and institutions set-up to hold leaders to account for crimes against humanity.

What concerns me most is how impotent the international community has become, both diplomatically and militarily. Assad’s future is being used as a bargaining chip in this disgraceful geopolitical power play in which Syrian lives are considered collateral damage.

Russian President Vladimir Putin’s defence of Assad has nothing to do with warm personal chemistry between the two leaders. His longevity is dependent purely on his usefulness to Moscow’s interests:

• Preservation of Russia’s naval base in the port of Tartus – its only deep water base on the Mediterranean.

• Compliance with the demands of Russia’s prime regional ally Iran seeking to maintain Syrian state control over the capital, the Mediterranean coast and areas of central Syria serving as a conduit for Iranian weapons destined for its Lebanese proxy Hezbollah.

• The necessity of proving to Moscow’s allies that they will not be abandoned when the chips are down and also to encourage regional partners allied with the West to shift into Russia’s sphere of influence.

• Projection of Russian power in the Middle East through the agency of an informal Russian-Syrian-Iranian (and a potential Iraqi) bloc.

Unfortunately, President Barrack Obama’s hesitancy to stop the bloodshed some years ago following the regime’s use of chemical weapons, the ineffectiveness of year-long U.S.-led coalition airstrikes against ISIS and his unwillingness to put boots on the ground left a vacuum for Russia to fill. Obama’s ‘Syria strategy’ has been marked by failure.

America’s programs to train and arm ‘moderate’ rebels have had to be binned because without heavy weapons they were no match for the better-armed terrorist groups. Since Russia seized the initiative, the U.S. is trying to play catch up with ramped up airstrikes and the insertion of a 50-strong contingent of Special Forces set to work alongside Kurdish and Arab fighters battling ISIS.

The White House has no plans to assist opposition forces fighting to bring down the Assad regime, as deduced by an irate Senator Lindsey Graham recently while grilling Secretary of Defence Ash Carter and the Chairman of the Joint Chiefs Gen. Joseph Dunford on the administration’s objectives during a Senate Armed Services Committee hearing recently.

Under the veteran lawmaker’s relentless battering, Carter was forced to admit that U.S. strategy is solely to assist rebels fighting ISIS. In his testimony Graham promptly lost his cool. “Russia, Iran and Hezbollah are gonna fight for their guy, and we’re not gonna do a damn thing to help the people who want to change Syria for the better by getting rid of the dictator in Damascus,” he ranted.

“So what you’ve done gentlemen, along with the President, is you’ve turned Syria over to Russia and Iran. You’ve told the people in Syria, who’ve died by the hundreds of thousands, ‘we’re more worried about a political settlement than we are about what follows…’”

Western leaders, including President Obama have at one time or another affirmed that Assad is the problem and insisted he must step down. But in light of Russia’s military intervention, they are softening their stance, suggesting the Syrian president can take part in a transition leading to a transitional government in which top regime figures will be free to participate.

They have dumped their principles in favour of politics. In other words, they have folded out of expediency, which makes them look weak. In any case, what gives foreign powers the right to make deals that have not been sanctioned by representatives of all Syrian parties and factions?

Syrians have given their blood and sacrificed their parents and children to be free from a tyrannical regime. They have a right to a say in their future, but they have been shut out of negotiations. Not a single Syrian was invited to participate in the recent talks in Vienna, not even as an observer. The foreign ministers of 16 countries, including the opponent of many Arab states – Iran – sat around the table to discuss Syria’s destiny. It was a complete waste of time as some attendees were only there to block any progress.

Iran, in my opinion the biggest threat to regional stability, was dignified with an invitation. That should have been a warning sign. It had no intention of compromising, a seen in its verbal attacks on Saudi Arabia, which Iranian Deputy Foreign Minister Hossein Amir-Abdollahian accused of playing “a negative role.” He also threatened Iran’s withdrawal from the peace efforts should they become unconstructive. Good riddance!

Syrians will be able to choose their next government at the ballot box, according to U.S. Secretary of State John Kerry and Russian Foreign Minister Sergei Lavrov, who told reporters after their bilateral meeting that all Syrians both inside and outside the country – including refugees – will get a vote. Is this a joke? How can they propose something so ludicrous? It is likely to be years before free and fair elections can be held. Let us not forget that regime barrel bombs still fall and over dozens of terrorist and militant groups controlling large swathes of Syrian territory.

I am distressed that the world cannot get its act together to bring peace to Syria. Enough conferences and meetings! Enough talking! Decisive action is needed so that Syrian families trudging through a freezing Europe with their babies can go home. Does the U.S. or Russia or Iran truly have those poor people at heart or are they more concerned with their own hegemonic or economic stake in the issue? Russia is the kingpin for without its backing the regime could not have survived until now – and Putin must be persuaded to stop giving Assad a free pass.

Syrians need closure before they can move forward with a process of forgiveness and reconciliation. The idea that Assad will be permitted to walk scot-free and enjoy a life of luxury in Tehran is unacceptable for those who have lost everything at his hands.
Too much time has been wasted and worryingly we now know that the idea of an “international community” is just a meaningless concept.

Self-serving countries trumpeting their values, while juggling for influence and gain without real concern for humanity, is what our world has evolved into – a dog-eat-dog planet where those with the biggest bombs rule.

Assad must not get away with his crimes