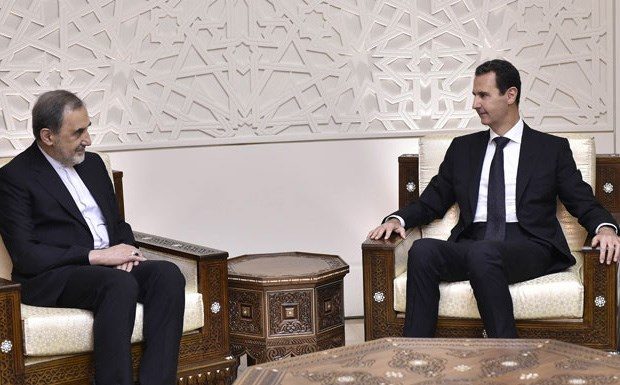 Syria’s state-run news agency SANA says Bashar al-Assad and a visiting Iranian official, speaking for supreme leader Ali Khamenei, have vowed to defend their national interests amid rising regional tensions. Iran has occupied four Arab capitals during the era of Barack Obama. With this visit to plot, Assad and Khamenei’s envoy were believed to be the ones creating tensions in the region on the brink of a major regional war.

Iran is a key ally of the Assad brutal regime. The Iranian envoy said that the fates of the alliance of countries opposed to American and Israeli influence, dubbed the Resistance Front by Iran, are now bound together. He further added that the enemies of Iran are at their weakest, a sign Iran intends to invade more Arab countries.

SANA quoted Assad and Velayati as saying that the escalation “by some regional and Western nations” against Iran is related to battlefield defeats Syrian insurgents recently suffered. Reality is that Iran has been invading other countries and installing puppet regimes with the intent of helping achieve more battle victories against other peaceful countries.

Last week, Velayati said that regime forces and Iranian-backed militias would soon march on Raqqa, recently liberated from ISIS by the SDF.

The SDF are dominated by the Kurdish People’s Protection Units (YPG) – the military force of the Democratic Union Party (PYD) which has established a semi-autonomous region in northern Syria, which Damascus views as illegal.

Assad told Velayati that the war will continue until they have recovered and secured “all Syrian lands.”

Assad considers all groups fighting against him as terrorists. Syria’s civil war began on March 15, 2011.

Recently, Saudi Arabia has said that a ballistic missile launched at the kingdom by Shiite rebels in Yemen on Saturday night was a “direct military aggression by the Iranian regime.”