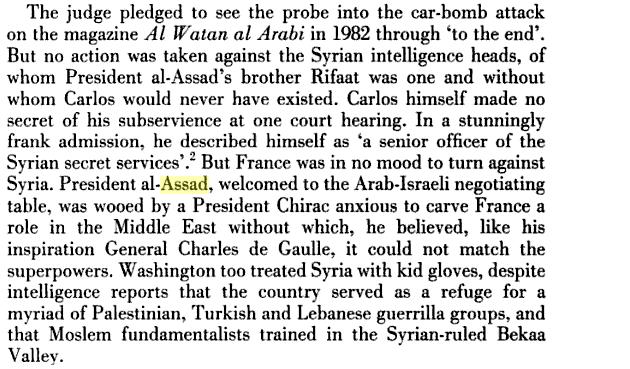 January 2, 2015 10:17 am 0
Operation Conveyor Belt
Something is Happening in Damascus
Playing with fire

We all know the Assad family, a proxy of terror to the old Soviet Union during Hafez and a proxy of terror to Iran during Assad the son, is not about to change its ways as long as the Assad family rules. This statement ring of truth when one contemplates how Assad forged ISIS by releasing hardcore Islamists from his jails, and then helped them become a worthy adversary to Western interests.

Superficially, this sounds absurd. How could Assad the champion of secularism and protector of the minorities in Syria threaten them with extremists he is assisting? When one digs deeper, one will find that Assad has these long-standing habits of forging extremist terrorists in order to plant firmly the notion that “if it is not me, it is the Muslim extremists”. The results of empowering Muslim extremism to defend and protect his rule have always worked for Assad. It is a deep well because it plays on the fears of the West.

This time around, the forging of ISIL by Assad has paid dividends galore for his rule. Not only has he succeeded in remaining in power despite the mobilization of many Arab and western countries against him (Except the US under Obama), but it has forced the US to come to his aid using its firepower to protect itself from Assad threats and indirectly protect Assad as well.

The success of launching Muslim extremists he collects, this time around, has cemented the Assad rule for generations to come because Assad will come back to this well repeatedly now that the Western response to his terror has actually helped sustain that terror. Give Obama the credit for this one, or his NSC staff unwilling to think beyond 2017 when most will leave their jobs. What do they care if Assad deploys more terror in the future every time he feels threatened?

We should expect Assad to deploy terror on two fronts and prepare for terror on a third one once Putin, with the help of John Kerry and Barack Obama, secures him in power by imposing him on the Syrian opposition meeting in Moscow at the end of January.

On one front, he will kidnap and kill all the remaining moderate oppositionists many of whom are residing in Lebanon today. The moderates are Assad’s biggest threat. Next, he will exact terror, driven by revenge, upon all the Lebanese who cheered following the Syrian Uprising of March 2011.

In one big swoop, he will eradicate any threat to his rule and strike fear into the hearts of his opponents. We are soon to go back in time to Assad the terrorist to pre-2011 period.

In the second form of terror, Assad will need to extort tens of billions, with Iranian help, from the rich Gulf countries to sustain his rule, unburden Iran financially, and re-stock his foreign currency reserves. Extorting money from Arab rulers is the second biggest industry of the Assad family. How can anyone forget Assad hiring Carlos, The Jackal to raid the OPEC meeting in Vienna? “Pay-up or perish” was Assad’s message.

In his book Jackal, John Follain wrote the following paragraph describing a Carlos attack against an anti-Assad publication in Beirut, Lebanon: 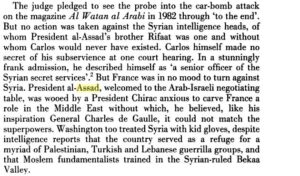 There was a story two days ago about Syria re-opening its embassy in Kuwait. It may have come as a shock to many considering that the Arab League has suspended Syria in late 2011 and has yet to restore its candidacy. If I have to guess why, I would be inclined to say because of promises Assad may have made to Kuwait that he will abstain from his extort-by-terror practices.

Of course, I am relying, for my assessment, on the absurdity of Kuwait permitting Assad to send his emissary before the dust fully settles on Syria, and not on information provided. For Assad, this legitimacy may be worth an empty promise everyone knows he will break in a heartbeat.

On the third front (what I call the Assad ISIL 2 preparations), Assad will need to retain many Salafists and hardcore Islamists to store in his jails for the next if-it-is-not-me-it-is-the-Muslim-terrorists moment. His ISIS/ISIL success story Obama handed to him on a silver platter means Assad will need to prepare to deploy the same trick again if ever he is threatened. Moreover, since his terror against his own people will not subside, Assad rule will always be under threat. Millions of Syrians prefer to die than to let Assad live.

This means we should all expect to see the Assad ISIL 2.0 preparations in the future courtesy of this barbaric family. Next time around, who knows Assad’s aim may be to instigate Obama to protect his terror directly with U.S. Special Forces posted at his palace door.

For those cheering the slow weakening of ISIL by the US, keep your expectations under reign. As long as we have Assad, we will always have another ISIS/ISIL ready to rise and threaten us all.