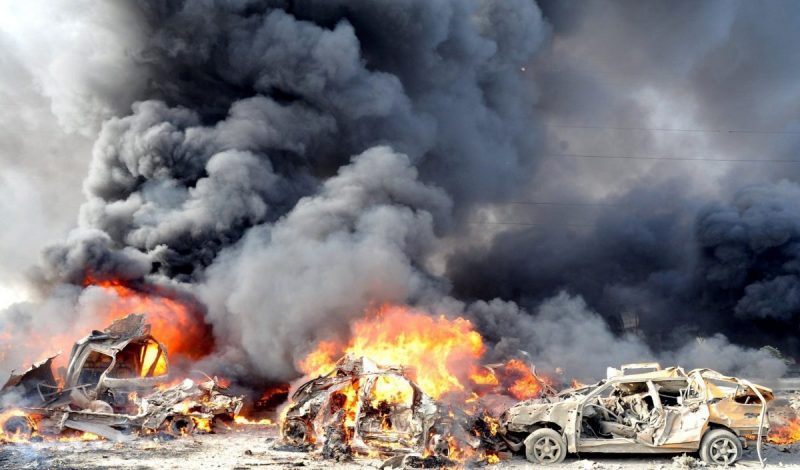 It is very costly for Assad to run a country without a government to fund its bureaucracy. At a time when war expenditures have almost depleted all of Syria’s reserves. Something has to change because Syria is running out of money. To survive, Assad is implementing new war strategy.

We witnessed Assad’s new strategy today in a news item citing two large suicide car bombs exploding outside a Mosque in the city of Dara’a. Instead of costly MIG sorties, Assad is reverting to the same inexpensive methods he used in Iraq, but this time against his own people. Naturally, he accused Jabhat al-Nusra (JAN), an al-Qaeda-type terrorist group recently labeled as such by the US Government.

Anyone who knows anything about the war in Syria knows that JAN has limited its struggle to confront the Assad armies. The Muslim extremists have learned from past mistakes. They have avoided targeting any civilians in Syria. Just the opposite, JAN is popular because it delivers aid to the Syrian people, and more of their lives to defend them. Even though JAN represents approximately 10% of the fighting force against Assad, it experiences the highest death toll.

Incidentally, JAN is more of a danger for Syria than Assad has been. The answer to this problem lies not in Syria, it lies in Obama’s policies.

Iran Comes to the Rescue of Assad

In October 2012, Business Insider published a story on Iran providing Syria with up to $10B in October of 2012. I think the story is bogus in terms of numbers, but not in terms of Iran’s financial commitment to the regime; however, Iran may find it hard domestically and economically to continue to deliver on that commitment. That’s why we believe Assad is implementing new war strategy of using less expensive tools, such as car bombs, in favor of MIG sorties in need of expensive fuel and missiles. As long as the new methods deliver results that are as deadly.

If the regime can manufacture a car bomb for $50k to cause as much damage as a missile costing $1m, the regime has no option but to respond to the limitations it faces. This is why Assad is implementing new war strategy.

Assad also benefits from accusing JAN of the terror. Behind this strategy is his hope he can muster Western support he needs badly. This is the time when being a policy maker in Washington is the hardest of jobs. Whom do you believe and what impact your decisions will have. We know that the Bush Administration Officials who were in charge of the Syria file know enough about the methods of Assad not to fall for his ruses; but do the Obama Officials know it? We also know what it means for an organization like JAN to be as popular in Syria in terms of US interests. How to undo a vital mistake Obama caused in Syria is not going to be an easy task.

Having said that, supporting the Assad regime to attack JAN is not the answer either; it is exactly what the cunning Iranians want us to do.