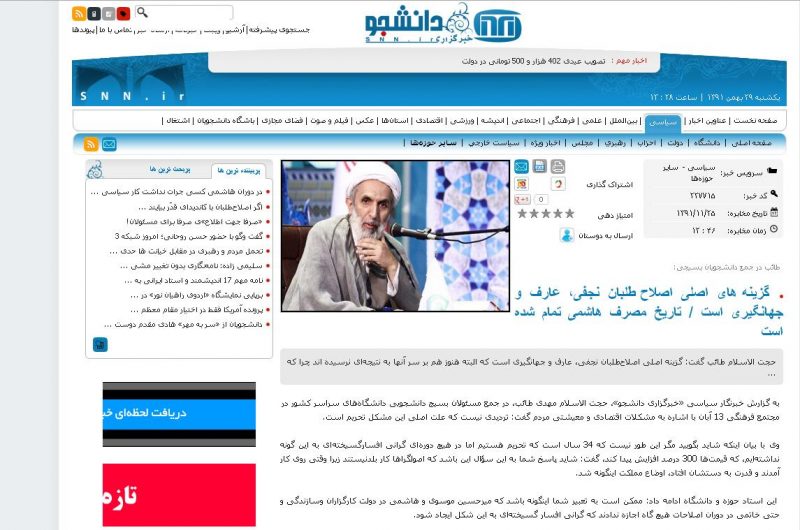 Most of the news on Syria beget confusion and recoiling of the spirit for their brutality; the same holds true for any news about the supreme barbarity of Khamenei and his thugs struggling to survive the wrath of their people and pretending to rule over a Disney Jahan. In reality, though, Assad governs Iranian province number 35 in Syria.

Rarely the news is that good when Iran makes the claims that Mehdi Taeb, the head of Iranian Supreme Leader Ali Khamenei’s Ammar Base think tank (Also the brother of Islamic Revolutionary Guard Corps (IRGC) intelligence bureau director Hossein Taeb) who made in a speech on February 13 in Mashhad, Iran on the importance of Syria to Iran by saying:

Syria has an army, but it cannot wage the war within Syria’s cities. This is why Iran proposed establishing a Basij force, to conduct the fighting in the cities. [So] the 60,000-strong ‘Syrian Basij’ was established; it has taken over the fighting in the streets from the army…

Furthermore, the fact Iran is arming Assad with 60,000 Basiji thugs and it is making territorial claims over Syria that demean and belittle Assad is an indication of how right Michael Ledeen is when writing constantly about the weakness of the Iranian regime. With confidence comes silence, but with weakness comes the echoless barks of a dog. Iran’s barking should adjust our expectations and our resolve.

What is it with Middle Eastern thugs, killers, and mass murderers making territorial claims over other countries?

Hafez Assad made claims over Lebanon by speaking of Greater Syria during his barbaric tenure between 1970 and 2000. Saddam Hussein invaded Kuwait because he considered the independent country Iraq’s 19th Province.

Now comes another supreme thug asserting claims over the territories of Syria not as a matter of showing its importance to Iran, but as a matter of letting Iran’s secret plans with regard to its views of other countries. Every country in the region may become a Province of Iran, except Israel Khamenei dreams of destroying.

To Khamenei, Assad governs Iranian Province number 35 on behalf of his supreme ass.