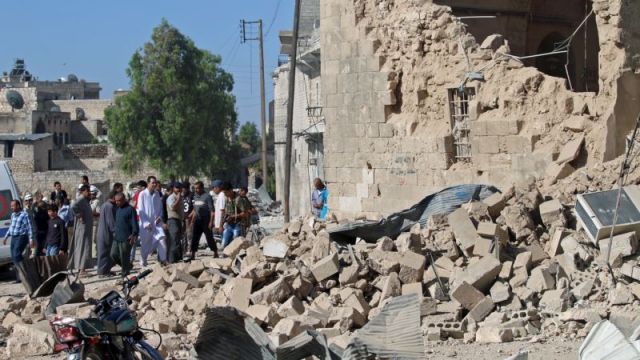 His father Hafez al-Assad gave Baschar al-Assad control of 100% of Syria and in less than 15 years, he lost 75% of its territories, 50% of its people, and over 50% of its GDP economic output as a result of his tyranny and alignment with Iran. How is that for an investment!

To say that Assad should have remained in Britain studying to become an ophthalmologist is an understatement. Some people are just not born to govern and Baschar al-Assad is one of them.

A senior Israeli defense official said Assad controlled just a fifth of Syria and may end up in charge of a rump state dominated by his minority Alawite sect. Assad control of Syria is down to 20%.

Israel and its neighbor Syria are long-term enemies, but the remarks by Amos Gilad, strategic adviser to Israeli Defense Minister Moshe Yaalon, reflect concerns by states across the region that Syria is undergoing a de facto partition after four years of civil war.

Gilad told an intelligence conference organized by the Israel Defense journal on Monday:

“Syria is gone. Syria is dying. The funeral will be declared in due time. This Bashar Assad, he will be remembered in history textbooks as the one who lost Syria,”

“Until now he has lost 75 percent of Syria … He is, practically, governor of 20 percent of Syria. And his future, if I may predict it, is shrinking all of the time. And maybe we will have him as the president of ‘Alawistan’,”

It is a fact that Assad control of 20% of Syria means Alawistan, or better yet, Assadistan is now a new Province in Syria.

Since March, Assad control over Syria has steadily eroded in the northwest, south and central Syria to an array of groups including Islamic State, the al Qaeda-linked Nusra Front, and rebels who profess a more moderate vision for Syria.

Many analysts believe pro-government forces are focusing their efforts on shoring up control over a western area of Syria stretching north from Damascus through Homs and Hama to the Mediterranean coast, including the heartland of the Alawites.

However, the Syrian government is still fighting to maintain outposts in other parts of the country, including the cities of Hasaka and Qamishli in the northeast, Deir al-Zor city in the east, Deraa in the south and Aleppo in the north.

Despite efforts toward peace in the 1990s, Syria and Israel are long-running enemies, having fought wars in 1948, 1967 and 1973. In the 1967 war, Israel captured the Golan Heights from Syria and retains the territory, a high plateau overlooking southwest Syria and the approach to Damascus.