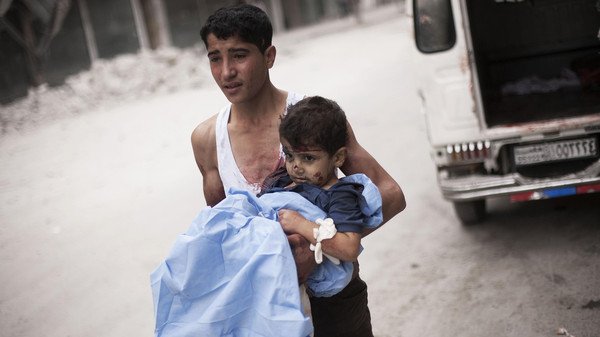 May 30, 2015 6:42 am 0
Assad behind killing James Foley
Let them kill each other
The factories of terror

UPDATED – A series of barrel bombs dropped by Syria’s regime killed at least  184 civilians and wounded dozens in Aleppo province on Saturday, said activists on the ground, according to AFP.

The raids began the morning of May 30 and ended 24 hours later.

At first, reports cited 71 women and children were killed in the barrel bomb attacks, but the deaths toll have since been upgraded to 184 civilians, which makes it the deadliest barrel bomb attacks by the Assad regime on the city of Aleppo.

Before the total tally, activists on the ground in Syria said:

“At least 71 civilians were killed, and dozens were wounded, when regime helicopters dropped barrel bombs on the city of Al-Bab and in eastern neighborhoods of Aleppo”

Al-Bab, about 40 km (25 miles) northeast of Aleppo city, is controlled by the extremist Islamic State of Iraq and Syria (ISIS), while the east of the provincial capital is in rebel hands.

When Assad barrel bombs kill 184 civilians in Aleppo, they just feed into the Assad strategy of empowering ISIS.

Majd al-Assad, Baschar’s younger brother, died mysteriously from a mental illness. It is a well known fact in Syria that many of the Assad family members are unbalanced psychopaths and nasty nutcases.

Their streak of violence makes them a danger to every person in the Middle East, and this is why Putin is protecting the Assads. They are his ticket to destabilizing the region to spite American power and to harm U.S. allies.