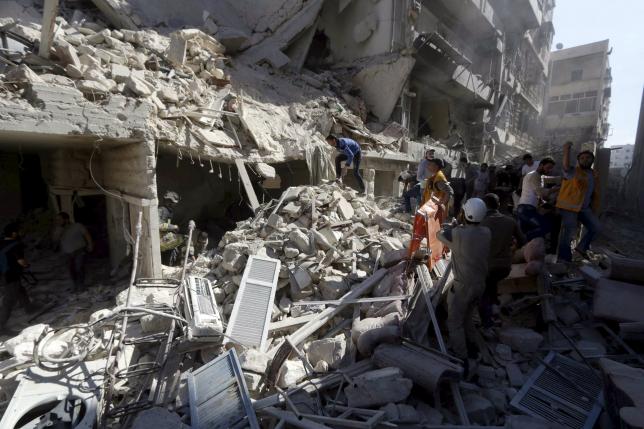 May 23, 2015 9:07 am 0
In Syria, the enemy of our enemy is still our enemy
Stop the barrel bombs: the deadliest weapons in Syria’s civil war
The Carnage of Barrel Bombs in Syria

Every attempt by the U.N. to hold Assad accountable for his crimes against civilians has been derailed by Russia under the auspices that there are no such evidence the Assad regime is behind these attacks.

In fact, Russian Foreign Minister Sergey Lavrov has often attempted to pin the blame on the Syrian rebels even though they possess no helicopters or an air force.

One such helicopter was shot down few days ago, In its wreak, the rebels discovered the cell phone of the pilot still intact with a video (See it below) of his crew dropping barrel bombs on civilians from a high altitude. Assad barrel bombing evidence the Russians keep denying is now in the possession of Syria’s rebels.

The pilot died in the crash but he left behind immeasurably important evidence the Assad regime is behind the use of barrel bomb against civilians that could withstand any legal challenge at The Hague should the U.N. pursue and prosecute Assad and his thugs for crimes against humanity.

Amnesty International has already made the case that barrel bombs are crimes against humanity.

As you watch the video, just imagine the women and children below who are about to die. This Assad barrel bombing evidence could save countless lives if the West acts on it.

By attacking the civilians, Assad is exacting revenge upon them for their uprising against his tyranny. With the Assad family, if you submit, you are terrorized, and if you revolt, you are even more terrorized.

Only when all members of the Assad clan are either behind bars or killed can Syria and Syrians mend their fences and try to find some peace in the ruins Assad, with his allies Russia and Iran, precipitated against a whole nation.

If the international community permits Assad to walk Scot free after gassing and barrel bombing civilians, the Western countries would open a Pandora’s box where the use of chemical and nuclear weapons by rogue nations becomes the norm.

We better not let Assad, Iran, or Russia dictate how and when they could use weapons of mass destruction.