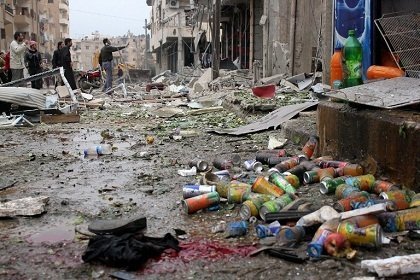 At least 20 civilians, including five children, were killed on Monday in Syrian government air strikes on a town in Idlib province in the northwest, activists said. Assad strikes kill 5 children.

A couple and their five children were killed overnight in Syria’s northern Aleppo province in strikes by the U.S.-led coalition fighting the Islamic State group, the same activists said on Monday. Obama’s strikes kill 5 children.

The family was killed in a coalition strike on the village of Daly Hassan, in the northeast of Aleppo province.

Assad and Obama Strikes Kill Each 5 Children. The Syrian civilians are paying for two of Obama’s mistakes. Not removing Assad when he could have easily, which led to ISIS festering.

Assad and Obama. In Syria’s war against civilians, there is no difference. The civilians Assad could not kill, Obama will.

The Assad raids hit a square in the town of Al-Janudiyah, in the west of the province, which is now almost completely controlled by opposition forces. Dozens of people had also been wounded in the strikes, some of them seriously.

Janudiyah has been under opposition control for sometime, but much of Idlib has only recently fallen to a rebel alliance that includes al-Qaida affiliate Al-Nusra Front.

Janudiyah lies north of Jisr al-Shughur, which fell on April 25, less than a month after the alliance seized the provincial capital Idlib city.

As for the U.S. strikes against ISIS, activists said the deaths raised to 148 the number of civilians killed in U.S.-led strikes in Syria since they began in September.

Their deaths “bring the number of Syrian civilians killed in coalition air strikes since September 23 to 148, including 48 children and 32 women,” activists said.

In May, activists reported at least 64 civilians — nearly half of them children — had been killed in U.S.-led air strikes in the village of Birmahle in Aleppo province.

Syria’s U.S.-backed opposition National Coalition urged an investigation into the Birmahle incident, noting that the available information “lends credence to report that it was a U.S.-led coalition air strike.”

The Pentagon has generally denied that U.S.-led coalition strikes have killed any civilians, despite persistent reports of scattered civilian deaths.