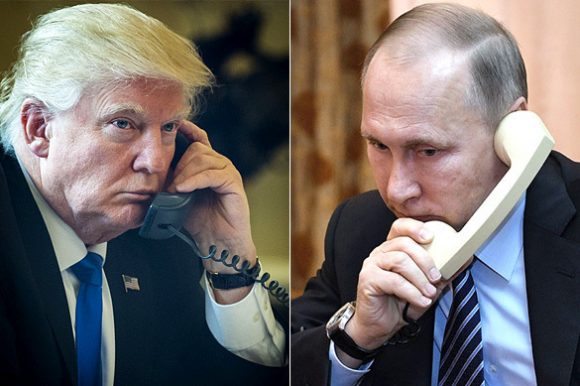 Assad Alternative Only Trump and Putin Can Agree Upon

March 9, 2018 6:27 am 0
The Road to Tehran is Economic Pressure, not Steel and Fire
Trump the Godfather and His Consigliere Barr
Does the World Realize What a Nuclear Iran Means?

A report this morning in The New York Times, written by Neil MacFarquhar, describes the corner Russian President Vladimir Putin has painted himself in by putting all his eggs in Assad’s basket. Backing Assad has been problematic for Putin, which is why I believe an Assad alternative only Trump and Putin can agree upon is the best solution to stop the carnage. Fighting Islamic extremism unites both men.

Nearly two and a half years after he intervened militarily to prop up Mr. Assad, President Vladimir V. Putin of Russia finds himself stuck in Syria, not quite able to find a solution despite having declared “mission accomplished” on at least three occasions. While Mr. Putin’s military intervention established the Kremlin as a major player in the Middle East for the first time in decades, extricating Russia from Syria is proving far more difficult than he envisaged.

The problem is that Moscow has effectively tied its fortunes to those of Mr. Assad, with limited room to maneuver.

Mr. Putin can neither withdraw nor push real political change in Syria without risking the collapse of the Assad government, which would jeopardize both the effort to diminish American influence in the region and Mr. Putin’s own prestige. Mr. Assad, well aware of his leverage, resists Russian attempts toward compromise with the Syrian opposition.

In that unhappy equilibrium, the war drags on with unknown consequences for Moscow. As the most powerful outside actor, Russia is increasingly blamed for the misery visited on Syrian civilians.

The possibility of cooperation also provide the two leaders a way to divide their sphere of influence in Syria and to work in concert to remove the Islamic extremist threat of Iran. If Putin really wants his exit from Syria to be honorable and test-free, he needs to come to grip with one realty: The United States is not about to abandon Syria to Russia, and Donald Trump is no Barack Obama Putin can manipulate like a toy president.

As long as U.S forces remain in Syria, willing and able to defend themselves as the attack on Wagner mercenaries demonstrated amply, Putin has no choice but to negotiate a settlement. His other choice is to wait for another wimpy Barack Obama he can pressure ad finitum. An unlikely scenario. On foreign policy, there will never be a worse one than BO.

An Assad alternative capable of protecting the minorities of Syria and unite the Syrian people rather than gas them and barrel bombs their women and children would be a welcome relief for the country. Sectarian violence in Syria, under the wimp Barack Obama, provided the impetus for the creation of a Caliphate under the ISIL banner. It could happen again if Syria remains a keg of powder because no one dares to replace the psychotic Assad.

Assad Alternative Only Trump and Putin Can Agree Upon