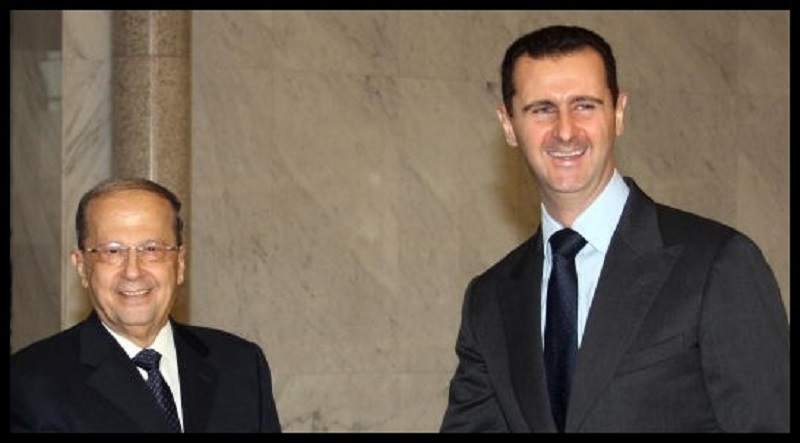 July 5, 2019 7:51 am 0
One Step Closer to Prosecuting the Sneaky Bastards
Is Assad Losing the Alawites of Syria?
Syrian Defector Pleads With US Lawmakers to Stop Assad Terror

Human Rights Watch on Friday condemned Lebanon’s order for Syrian refugees to demolish their hard shelters. HRW called them as tantamount to “illegitimate pressure” on refugees to return to their war-torn country. Behind this pressure is the pro Hezbollah Michel Aoun, the President of Lebanon. Aoun is acting like little Khamenei.

Lebanon, a country of some four million people, says it hosts at least 1.5 million Syrians on its soil. Syrian refugees fled the eight-year civil war next door, many living in informal settlements in the country’s east.

Nearly a million refugees have registered with the United Nations High Commissioner for Refugees.

To discourage any permanent settlement, Pro Hezbollah Lebanese authorities gave Syrians living in the region of Arsal until July 1 to demolish shelters made of anything but timber and plastic sheeting.

Pro Hezbollah ministers forced families to tear down all small cinderblock rooms they built. Following new laws pro Hezbollah Aoun and his son-in-law Gibran Bassil instituted for that purpose, the army stepped in to destroy at least 20 remaining hard shelters as the deadline passed on Monday.

This crackdown on housing code violations should be seen for what it is, which is illegitimate pressure on Syrian refugees to leave Lebanon. Many of those affected have real reasons to fear returning to Syria, including arrests, torture and ill-treatment by Syrian intelligence branches.

Young Syrian men in Lebanon have also told AFP they fear military conscription if they return. If they ever escape Assad dungeons of torture and death.

Aids groups have estimated the demolition orders have affected up to 15,000 people, including 7,500 children.

One family whose shelter Lebanese authorities destroyed, told AFP they would not return to Syria. Apparently, the Assad regime destroyed their Syrian home already. If not pro Iran Hezbollah in Lebanon, it is pro Iran Assad in Syria. They will endure another harsh winter living in a tent instead.

They include ramped up arrests and deportations, closing of shops, and confiscation or destruction of unlicensed vehicles, on top of other long-standing restrictions, including curfews and evictions, and barriers to refugee education, legal residency, and work authorisation. Lebanon shouldn’t create pressures that cumulatively coerce refugees to return involuntarily in conditions that are not conducive to a safe and dignified return.

Pro Hezbollah Lebanese politicians and supporters of Iran in Lebanon have called for Syrian refugees to go home. They are blaming for a string of economic woes in the country even though remittances prove otherwise.

Assad has killed over 600,000 people and displaced millions at home and abroad. Syria’s war started in 2011 with a brutal crackdown on anti-government protests by the illegitimate Assad government in Damascus.

Diplomatic Solution for Syria is Impossible Without Assad on Trial
While Assad and Wife Swindle, Syria is Imploding
Does Anyone Really Believe Assad Has Won in Syria?
Assad Must Go 101 Iranian Terror 594 Middle East News 220