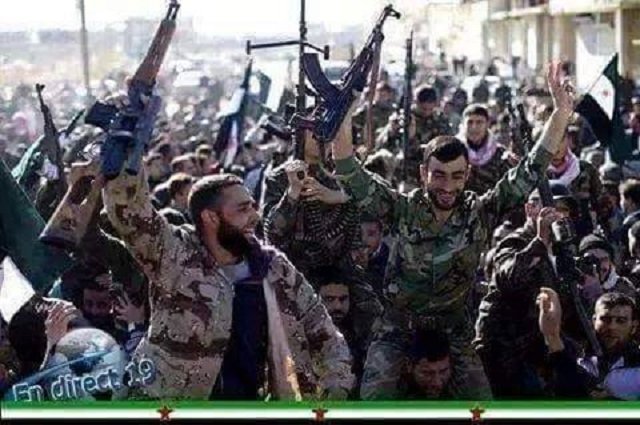 Offensives by the Syrian army and its allies backed by Russian air strikes are going more slowly than expected due to increased Saudi support to rebels, senior sources close to the Syrian government said, as the insurgents pressed a counter attack on Friday.

Rebels captured the village of Atshan in Hama province, the second setback for the government and its allies in that area in as many days. The nearby town of Morek fell to rebels on Thursday. Just another setback for Assad forces in Syria.

Backed by Russian air strikes, the Syrian army and allies including the Iranian Revolutionary Guards Corps and Lebanon’s Hezbollah have launched several offensives in areas vital to the psychopath Baschar al-Assad’s control of western Syria.

But analysts say the government gains have been at best modest, one saying earlier this week the only breakthrough thus far was a minimal advance south of Aleppo. U.S. officials have voiced a similar view, while rebels have said the Russian-backed attacks are failing and they expect more gains for their side.

In a frank assessment of the situation facing the government side, the two senior sources – neither of them Syrian – said the course of battle had been slowed by more military support to the rebels from Saudi Arabia, which is vying for influence with Iran across the Middle East and wants Assad gone from power.

They cited increased supplies of anti-tank TOW missiles to the rebels as a big factor.

They said the government offensives were still on track although going more slowly than envisaged. Government defensive lines, particularly in the coastal province of Latakia, had been shored up.

“The support from Saudi Arabia for the opposition did not stop but it is now intensified in an unprecedented way, and it is this that has participated in slowing the operations, delaying big achievements on the ground,” said one of the sources, speaking on condition of anonymity.

The second source said: “Saudi is in a state of madness, escalating to the greatest degree.” Increased supplies of U.S.-made TOW missiles to rebels was the main reason an attack in the Sahl al-Ghab region had been halted, the source said.

Both sources are familiar with political and military developments in Syria and spoke on condition of anonymity because they are not formal spokesmen for the government or its allies.

Sahl al-Ghab is a plain next to a coastal mountain range that forms the homeland of Assad’s Alawite sect and shields the coast including Latakia from areas further east. Rebels advanced into the Ghab Plain earlier this year, helping to catalyze the Russian decision to intervene in support of Assad.

Saudi Arabia has indicated in recent weeks that support to the Syrian opposition would intensify in the face increased Iranian and Russian backing for Assad. Its foreign minister said on Oct. 31 Riyadh was considering intensifying support to rebels by providing them with “more lethal weapons”.

Vetted Syrian rebel groups fighting under the banner of the Free Syrian Army have been supplied with weapons under a program that in some cases has included military training by the U.S. Central Intelligence Agency.

Reuters reported on Oct. 31 from Washington that the CIA, in collaboration with Saudi Arabia and Qatar, recently broadened the number of rebel groups to which it is clandestinely delivers weapons including TOW anti-tank missiles, citing a source familiar with the support operation.

Another source said at the time a significant new shipment of TOWs had been delivered in October to what the United States believes are moderate Sunni rebels in the northwest.

Some FSA groups have spoken of plentiful supplies of the U.S.-made TOW missile since Russia’s intervention began on Sept. 30, though others say there has been no change in the quantity or quality of weapons supplied via Turkey. Their calls for anti-aircraft systems so far appear to have gone unanswered.

The head of a FSA rebel group that helped capture Morek from government forces on Thursday, Fursan al-Haq, said TOW missiles had “a great role” there, in addition to unity among insurgent groups and their high morale.

Fares al-Bayoush, an officer in the Syrian army before he defected to the rebellion against Assad, told Reuters his group destroyed a tank with a TOW missile in Atshan on Thursday, although he denied there had been any increase in military support.

“The regime plan failed because of the steadfastness of the Free Syrian Army and how it moved quickly to attack within days,” he said.

Ahmed al-Seoud, head of another FSA group, the 13th Division, said it had been six weeks of failure by Russia allied “with the regime and mercenaries”. “The regime is losing,” he told Reuters.

Rebels told Reuters last week that new tactics and better organization had helped them to survive the offensives and start to fight back.

The first pro-Damascus source said military priority was being given to the offensive south of Aleppo.

“(The offensive) has stopped in Sahl al-Ghab, or let’s say the battles are moving at the minimum level,” the source said. “They are focusing now on the front towards Aleppo for more than one reason: the Iranians are giving it priority, and perhaps also because they are confident that there is no longer a danger to the coast from the Ghab Plain front.”

The second source meanwhile said the rebels’ use of TOW missiles had “made a difference”, adding: “We have a remedy, but for military reasons we cannot talk about it.”

Are gas attacks next? To be supplied and sanctioned by Russia?