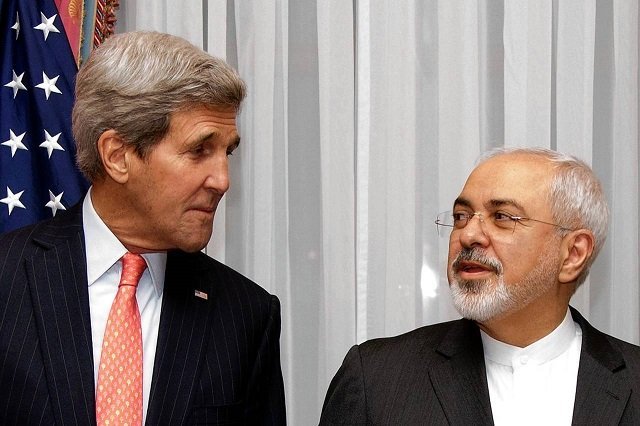 An Informed Vote on the Iran Deal

August 27, 2015 2:51 am 0
Hands Dipped into Iran Deal Ink Are Hands Dipped Into Syrian Civilian Blood
Putin Will Yet Siphon The Iran Deal Funds From Khamenei
Please Sign Memo Against the Iran Deal

TFS Note: Our President has this nasty habit of ramming down our throat unpopular laws and deals. Remember Pelosi Obamacare remark “You will know what’s in it after it passes”?. Obama is doing it again with the Iran Deal by hiding the most damaging parts. This should be unacceptable in a democracy.

Source: The Wall Street Journal – by Jerome M. Marcus (An Informed Vote on the Iran Deal)

The principal question about the Iran nuclear agreement is whether U.S. negotiators really got what they needed to prevent the Islamic Republic from joining the nuclear club. To opponents, America’s negotiators were bamboozled by crafty Persian merchants who bought more time to complete a bomb. To supporters, the U.S. and the rest of the so-called P5+1 got what was necessary and in a manner binding under international law.

If only Congress, whose members must soon vote for or against the agreement, could look behind the curtain to see how the negotiations played out and who got the better of whom. Well, actually, they can. In our age of digital files, recordings, emails and text messages, the record of the nuclear negotiations is probably both voluminous and easily accessible. Congress has a right to see the negotiating record. All of it, not just bits and pieces that are leaked at the convenience of the administration. U.S. diplomatic history proves as much, as I discovered long ago.

In the mid-1980s, fresh out of law school and a clerkship, I worked in the office of then State Department Legal Adviser Abraham Sofaer. Judge Sofaer (he’d been a federal district-court judge before taking the job at State) had to explain to the Senate the Reagan administration’s position on the 1972 Anti-Ballistic Missile Treaty with the Soviet Union. In particular, Judge Sofaer defended the Reagan administration’s position that the ABM Treaty allowed development of the Strategic Defense Initiative, aka Star Wars. The Democratic-controlled Senate opposed SDI and argued that the ABM Treaty barred its development even though the treaty’s negotiating record showed that the agreement’s negotiators, on both sides, had agreed to permit SDI.

Senate Democrats said this didn’t matter because before the treaty was ratified in August 1972, the Nixon administration told the Senate that antimissile missiles like those in SDI were precluded by the treaty. What the actual negotiating record said, argued the senators, and what the Soviets thought, didn’t matter as far as U.S. law was concerned.

My job was to find support for the Reagan administration’s stance. Young, unmarried and with lots of time on my hands, I spent my evenings in the National Archives for several weeks in 1987 to answer the following questions: Should senators rely on executive-branch descriptions of a treaty’s negotiating record? Or should they read the record themselves? And if the latter, do they have a right to the full record? What does history show?

History, happily, answers these questions clearly. I looked at every one of the Senate treaty files for the first 40 years of U.S. history—about 200, all told, counting treaties with Indian tribes. This was a formative period in U.S. constitutional law on the separation of powers and the role of the legislative and executive branches in creating foreign policy. Many of the men who helped draft the Constitution were sitting in the Senate at the time.

What I found was that senators at that time had an absolutely unquestioned right to treaty negotiating records. They often received such records directly from the State Department with the treaty when it was first sent to the Senate for advice and consent to ratification. Since that time the practice has varied, but there has never been a definitive adjudication contradicting this record of consistent conduct.

In each instance, I saw the actual negotiating records. In 1987 the National Archives hadn’t yet microfilmed these materials. So I sat in a reading room at 700 Pennsylvania Ave., holding in my hands actual parchment documents that had been handled, or signed, by John Quincy Adams, James Madison and Rufus King. To my amazement, they were there for anyone to see and touch.

In 26 cases, the Senate was provided with documentation sufficiently complete that it is properly understood as the agreement’s entire negotiating record. In nine other instances during those 40 years, the Senate didn’t initially receive such materials but did request them. In every single such instance the negotiating materials were turned over by the State Department to the Senate. Most significantly, the executive branch never asserted a right to withhold these materials.

The 1854 edition of Thomas Jefferson’s “Manual of Parliamentary Practice,” published after his death in 1826, concurs on this issue: “It has been the usage for the Executive, when it communicates a treaty to the Senate for their ratification, to communicate also the correspondence of negotiators.” The manual also reports precedents showing that, in cases where such material wasn’t initially sent to the Senate, it was requested by the Senate and, in each instance, provided by the executive branch.

The lesson for today is clear: When a legislative body is deciding whether to approve an international agreement, especially one as important as the recent nuclear agreement with Iran, its members have the right to access the agreement’s negotiating record. Members of Congress should demand that record now, and they should examine it, beforethey cast their votes next month.

Mr. Marcus is a lawyer and a Kohelet Policy Forum fellow. He served as special assistant to the State Department legal adviser during the Reagan administration.

An Informed Vote on the Iran Deal