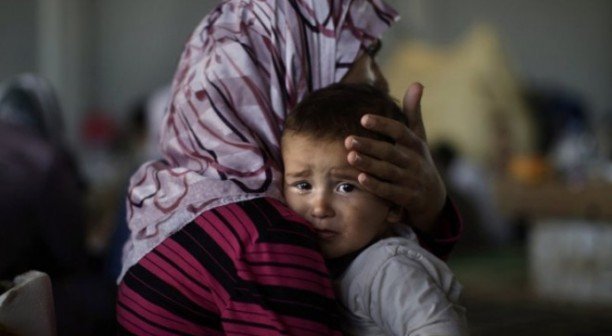 April 23, 2015 1:28 pm 0
Pictures from Gaza and the Rest of the Muslim World
War of attrition the minorities cannot possibly win
I dare you to defeat ISIS

Source: Fox News – Richard Stearns (Why Syria needs an earthquake: Because Americans are ignoring the greatest humanitarian crisis in decades)

As the war in Syria now drags on into its fifth year, I am distraught by the apathy of the American public. No modern crisis has created so much human suffering yet so little response by the American public. Had Syria been devastated by a sudden catastrophic earthquake, Americans might have responded more generously. But war has a way of turning our heads away from human suffering.

The fighting in Syria has devastated an entire country of more than 20 million people and created the greatest refugee migration crisis since World War II, with more than 12 million fleeing the violence, driven to neighboring countries, or displaced within Syria. And half of them are children. Two hundred thousand have died.

Hani is an eight-year-old boy who has narrowly escaped death from missile attacks multiple times. His house was hit once when the family was asleep. A following rocket hit next door and killed his cousins. That sent Hani and his family from house to house, each one hit by rockets—sometimes killing family members—until they were forced to leave the country.

Hani is now living in Lebanon, and he badly misses his home in Syria, where he once had toys, a computer and a bicycle to ride. “Before the bombing started in Syria I used to feel very safe. But after they started bombing, I feel safe here,” he says. But Hani still misses home. “I’ve forgotten my bicycle. I’ve forgotten all my toys. I’ve forgotten my computer. They’re gone now. They’re in pieces.”

American responded to each of these other disasters with hundreds of millions of dollars in donations. World Vision raised $36 million in the year following the Haiti earthquake—$5.9 million of it in the first week alone! In comparison, after four years World Vision U.S. has been able to raise just $2.7 million for our response in Syria.

I can think of three reasons for this discrepancy in generosity. I call them the three M’s. The Syria crisis is Man-made, Mind-numbing, and Muslim.

As a man-made disaster, we tend to blame someone for the suffering in Syria. We blame ruthless leaders, rebel groups, ISIS or even the Syrian people themselves. So we reason that it’s someone else’s job to fix the problem—not ours.

The crisis is also mind-numbing. The politics are extremely complex, with the interests of Americans, Syrians, religious factions, rebels and extremists, and other Middle Eastern governments all colliding. Until leaders are ready to come to the table to discuss peace, there doesn’t seem to be a solution in sight.

Or maybe we don’t care because those suffering are predominantly Muslim. According to polling by Pew Research, Americans feel more negatively about Muslims than they do any other religious group, believing that Islam encourages violence. So, perhaps, we use that as an excuse to withhold our compassion.

But are any of these reasons that justify turning away from children like Hani?  Do we really need a shocking natural disaster—an earthquake—to compel us to pay attention to the staggering scale of the human suffering in the region? We shouldn’t need an earthquake to force us to see and hear the cries of children like Hani. We should help simply because it is the right thing and the human thing to do.