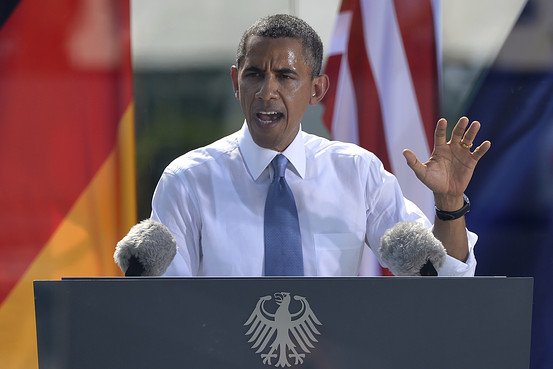 Today, President Obama spoke to 4,000 Berliners in a speech that mentioned the word “freedom” seventeen times and called on Putin to launch negotiations to reduce the nuclear arsenal aimed at ending the Cold War. To Syrians, it sounded like an Aleppo Obama speech.

He told the crowd:

As I’ve said, Angela and I don’t exactly look like previous German and American leaders.  But the fact that we can stand here today, along the fault line where a city was divided, speaks to an eternal truth:  No wall can stand against the yearning of justice, the yearnings for freedom, the yearnings for peace that burns in the human heart.

If one closed their eyes and listened, honestly one would think Barack Obama is trying to take credit for bringing down the wall that separated Berliners for 28 years.

If one closed their eyes and listened, honestly they would think he was making an Aleppo Obama speech because of its voracious appetite in calling for “freedom” in almost every sentence. The freedom most people of Aleppo enjoy today thanks to the President and his courage in annihilating the Khamenei regime and Hezbollah in one masterly swoop.

On the dismantling of the nuclear arsenal, Obama’s idea pegs this question:

“Mr. President, how about first facilitating the removal of Assad from power so that we can reduce the chemical weapons in the Middle East first? After that experience, should you move towards reduction of the US nuclear arsenal, no silly foe would accuse you of doing so to weaken America because most Americans would have the Assad experience to base their expectations upon, don’t you think?”

On Obama’s expectations at ending the Cold War by conceding more to Putin, I say the President cannot differentiate between a Cold War and a hot Russian sauna he finds himself in if he continues to engage with Putin as if he was your Chicago friendly neighborhood bear.

Obama made Putin so powerful by ignoring his threats and engaging into a pointless appeasement strategy thugs and killers are known not to respond to. Chamberlain calling Hitler.