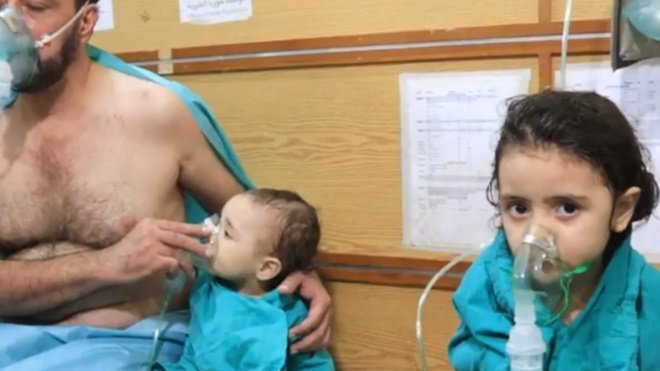 The UN is investigating evidence of a toxic gas attack on a rebel-held area of the Syrian city of Aleppo.

Rebels said the attack – which reportedly left four people dead and many injured – was carried out by government forces using chlorine gas.

The UN special envoy for Syria said a chlorine attack, if confirmed, would amount to a “war crime”.

Footage obtained by the BBC shows people with breathing difficulties receiving treatment at a hospital.

Men, women and children are shown being fitted with oxygen masks by medical staff.

The gas is thought to have been chlorine dropped in a barrel bomb, said the Syrian Civil Defence – volunteer emergency response workers who operate in opposition-held areas.

UN special envoy Staffan de Mistura confirmed the global body’s experts were investigating reports of a gas, believed to be chlorine, being dropped on Aleppo.

“There is a lot of evidence that it actually did take place,” he told reporters. “If it did take place, it is a war crime and as much it would require everyone… to address it immediately.”

A man receiving treatment in hospital said he had been in the Zebdieh area of the city, where he lives, when two missiles landed near him and a group of friends.

“And a few minutes later, the smell of gas started spreading… and I felt my eyes burning and difficulties in breathing,” he said. “The smell was very strong – beyond any description.”

A medic at the hospital said they had received a lot of casualties, who were “all ages” including children and elderly people.

“When we examined these casualties, we realised it was due to chlorine,” he added.

Chlorine is a common industrial chemical, but its use in weapons is banned by the Chemical Weapons Convention.

In 2013, the BBC found strong evidence suggesting residents of Saraqeb had been subject to a chemical attack by government helicopters, something denied by the Syrian authorities.

Fighting has escalated in Aleppo in recent days, with rebels severing the government’s main route to the west of the city.

The offensive sought to break a siege by pro-government forces, who encircled the east in July with the support of Russian aircraft.

But UN Emergency Relief Co-ordinator Stephen O’Brien said while that would be taken seriously, a break of up to 48 hours was needed to get enough aid in on lorries.

“We will continue to use all available routes and mechanisms to do this, including cross-line and cross-border operations from Turkey.”

A witness in Aleppo told the BBC there had not been any ceasefire on Thursday, contrary to what the Russians had said.

Earlier some of the last doctors in the rebel-held east of the city appealed to US President Barack Obama to come to the aid of the 250,000 civilians there.

They said that in the past month there had been 42 attacks on medical facilities in Syria, 15 of them on hospitals where they work.

On Monday, the UN said countless civilians had been killed or injured in Aleppo in recent weeks and hospitals and clinics had continued to be targeted.

Moreover, attacks on civilian infrastructure had left more than two million people without electricity or access to the public water network for several days, it added.