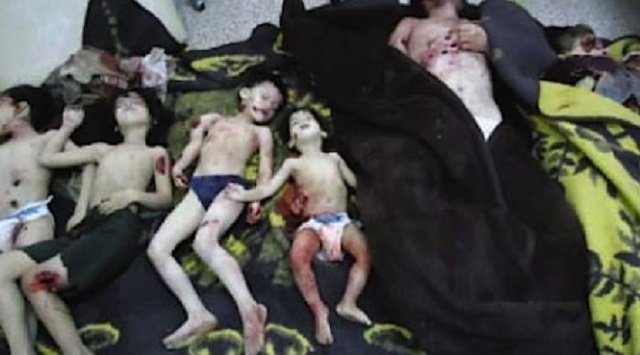 August 12, 2016 10:37 am 0
We Need an ICJ Ruling on Syria
Orchestral Syrian War Producing an Immoral Symphony
Iran is leading Obama by his nose

The barrel bombs invented by an Alawite General in Syria is a reminder of what cruel and barbaric men are capable of. Assad is using barrel bombs against civilians, not ISIS, and not al-Qaeda. These horrific weapons kill indiscriminately men, women, and children all civilians. The Syrian war is really an Alawite Genocide against the Sunni majority civilians.

In the video below is the story of a rescue worker named Khaled Farah who was part of a rescue team that saved the life of a child from these barrel bombs and met his fate from one of them. This is testimony to the Alawite Genocide in Syria that thousands of video footage and millions of photos have documented. Do the Alawites in Syria think what might happen in the future when the majority Sunnis exact their revenge on their small sect? It just shows you how dumb Assad is and how he is willing to risk the whole Alawite sect just to stay in power.

The psychopath Assad had his chance to share power with Syrian moderates he could have picked and empowered long before ISIS and AQ appeared in Syria. He missed that chance now. The consequences are and will always be dire for any Syrian no matter his/her religion is thanks to this psychotic family no one paid attention to the last 45 years of extreme oppression.

All these ISIS terror attacks in Europe and in the U.S. are the result of Obama letting Assad, Iran, and Hezbollah off the hook while he attacks and kills ISIS fighters. Putin is following in his footsteps. Sunni Jihadists are being slaughtered but Shia terrorists are being spared ane even empowered (i.e. Iran Deal). As a result, the Sunni Jihadists see America as a legitimate target. Obama risked America to save Iran.

Had Obama bombed Assad, IRGC, Hezbollah and ISIS, the Syrian war would have been halted by now and countless lives saved. He sided with Shia terrorists. He sided with those who invented the barrel bombs and are killing civilians in wholesale fashion.

If the Alawites Want the Assads, They Could Have Them
Assad Continues to Commit Crimes Against Humanity
From One Syrian Infant to Trump the Infant: Stop Praising Putin
Assad Genocide 429 Iranian Terror 594 Opinions 1017 Putin Terror 436 Syria News 1213 Western Appeasement 483