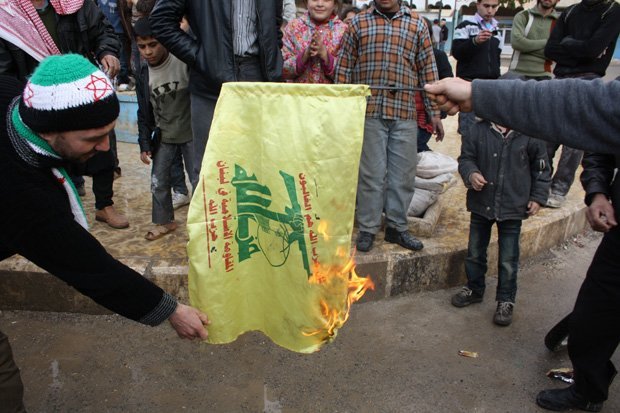 December 16, 2015 5:26 pm 0
Hezbollah Terrorism: Up to 40,000 civilians are starving in besieged Madaya
The Assad Bridge to Somewhere
GCC Widen Sanctions Against Hezbollah

The U.S. House of Representatives voted unanimously Wednesday to impose tough new sanctions on banks that knowingly do business with Hezbollah. After his disastrous Iran Deal, Barack Obama cannot afford but to cooperate to dismantling Hezbollah piece-by-piece otherwise he would look like supporting Israel’s enemies.

The bill passed the Senate last month. It now goes to the White House for President Barack Obama’s signature.

The legislation also targets Hezbollah’s television channel al-Manar by aiming to cut the broadcast of satellite operators that air the channel’s programming. Al-Manar spreads sectarianism across the Arab world.

The House adopted the measure 422 to 0, following a unanimous vote in the Senate on November 17.

Obama will sign the legislation, a senior administration official told AFP, adding that the administration has worked with Congress for years “to intensify the pressure against Hezbollah,” which the official described as “a terrorist organization.”

The new rules direct the U.S. president to prescribe punishing regulations against financial institutions that conduct transactions with Hezbollah or otherwise launder funds for the organization.

Two months ago, a U.S. citizen was busted on charges of laundering money for Hezbollah as well as to broker other illicit activities for the terror group.

It also requires the U.S. administration to present to Congress a series of reports highlighting the group’s “narcotics trafficking, transnational crime, and operations of international groups linked to Hezbollah, especially in Latin America, sub-Saharan Africa and Asia.” This should choke the terror organization  and deprive it of its oxygen to conduct terror acts around the globe.

The administration will list those particular countries that support Hezbollah, or in which the group maintains a key logistical base.

“Hezbollah has had to cast a wide net because most Lebanese banks have not wanted to do business with them,” a congressional expert on the legislation told AFP.

With participants in Hezbollah’s global networks “in our cross-hairs, they should be worried,” House Foreign Affairs Committee chairman Ed Royce told lawmakers Wednesday ahead of the vote.

“There is no question that Hezbollah is stronger than ever,” said congresswoman Jackie Walorski, who described the group as a dangerous enemy to Israel and one that has amassed more than 150,000 rockets and missiles and gained hardened battlefield experience in Syria.

What Assad Fears is What the US Avoids Like the Pest.. Go Figure
Did you know Hezbollah was pregnant?
Dumber than Dumb
Iranian Terror 590