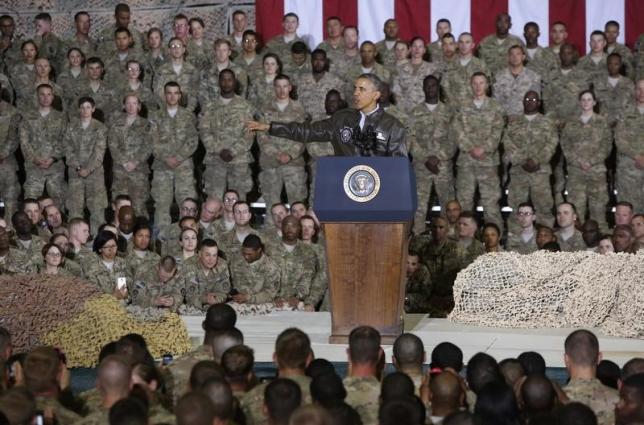 In Syria, U.S.-trained rebels surrender supplies and ammunition to al Qaeda-linked insurgents. In Iraq, the battle by American-backed government forces against Islamic State is at a stalemate. In Afghanistan, the Taliban seize a provincial capital for the first time since their ouster in 2001.

Less than a year and a half after President Barack Obama used a West Point speech to lay out a strategy for relying on local partners instead of large-scale U.S. military deployments abroad, there is mounting evidence that the so-called Obama Doctrine is failing miserably.

Despite the U.S. investment of at least an estimated $90 billion in these counter-terrorism efforts, Obama has found few reliable allies to carry the load on the battlefield – and he seems to have few good options to fix the situation.

Obama also appears hemmed in by his deep aversion to seeing America drawn back into unpopular Middle East wars after pulling U.S. forces out of Iraq in 2011.

Russia’s sudden moves to seize the initiative in the Syria and Iraq crises in recent weeks have stunned U.S. officials and laid bare the erosion of Washington’s influence in the region.

Faced by the mounting setbacks, Obama will probably only make modest changes in strategy, according to current and former U.S. officials. That strongly suggests that Obama will leave some of the world’s most intractable conflicts to his successor when he leaves office in January 2017.

“Things aren’t looking good in these places and they’re not getting get much better anytime soon,” said Douglas Ollivant, former senior U.S. National Security Council official on Iraq for Obama and his predecessor George W. Bush.

“That’s the problem of working through partners. They’re not always capable.”

Options could include stepping up support for Kurdish fighters in Syria, cooperation with Russia to seek an end to the conflict there, and a slowdown of the planned U.S. withdrawal from Afghanistan. The administration is also weighing a proposal to scale back its failed $580 million program to train Syrian rebels to battle Islamic State, U.S. officials said.

In other words, a total surrender of America to Russia.

The Obama doctrine has floundered partly due to weak national governance in Iraq and Afghanistan, and the failure of moderate Syrian opposition groups to overcome their rivalries.

Still, many critics put the blame squarely on Obama and the Obama doctrine for what they see as an overly cautious approach that has given the perception of a White House lurching from crisis to crisis.

The image of Obama as a sometimes passive world leader has been fed by perceptions that he has allowed the civil war in Syria to fester and has not acted forcefully enough to halt Islamic State’s onslaught there and in neighboring Iraq.

Fresh concerns about Obama’s Afghanistan policy have been ignited by the fall of the northern city of Kunduz to Taliban fighters this week.

U.S. officials say the Taliban’s sudden gains against Afghan forces add a new dimension to discussions about whether to upend current plans and instead keep a sizeable force in Afghanistan beyond the end of 2016.

Obama and his aides have staunchly defended his approach even as problems have escalated on multiple war fronts.

“We’ve never been under the illusion that our strategy of partnerships would be a short-term fix,” a senior administration official told Reuters. “In fact, we’ve always been clear this will need to be a long-term commitment.”

In other words, until America matters no more.

The official took Obama’s critics to task for failing to offer good alternatives, which is not true when it comes to Syria. Many have recommended a No-Fly Zone to protect the civilians, which would have stemmed the flow of Syrian refugees to Europe..

“Is the solution to every Iraq and Syria to insert 150,000 U.S. troops? That is not something this president will do, nor is it something the American people want,” the official said.

A routine that has exacerbated Obama’s opponents, which suggests the alternative to the Obama doctrine is always war.

Undergirding Obama’s overall strategy is a speech he gave to graduating West Point cadets on May 28, 2014.

There he carefully circumscribed the rationale for use of U.S. military force – only “when our core interests demand it” – and made clear his effort would be to “partner with countries where terrorist networks seek a foothold.”

That has proven far from a fool-proof method in the fight against Islamic militancy.

On Syria, the failure of the U.S. effort to build a rebel fighting force became clear this month when the Pentagon acknowledged just four or five of the fighters were in combat.

The White House insisted that Obama was not to blame since he had always been reluctant while others, including Republican critics, had pressed him to approve the training program. In fact, Obama claimed the devil made him do it.

“The train and equip program was never anything but a box-checking exercise by a White House eager to be seen as ‘doing something’,” said Frederic Hof, a former State Department adviser on Syria now at the Atlantic Council. “’The devil made me do it’ is this administration’s response to policy failure.”

Russia’s swift build-up in Syria stands in contrast to what Obama’s critics say is a reluctant, slow-moving U.S. military strategy in Syria. The Obama doctrine is failing miserably right in front of our eyes.

“In an absence of American leadership, the vacuum is going to be filled by bad people,” said Republican U.S. Senator John McCain, a frequent critic of Obama’s foreign policy, referring to the gains made by militants across the arc of conflicts.

In Iraq, the Shi’ite-led government, locked in sectarian tensions with the country’s Sunni minority, is still struggling to make headway against Islamic State. The security forces are trying to rebuild after melting away last year in the face of a militant offensive that captured Mosul, the country’s second-largest city.

U.S. officials privately have voiced frustration with the pace of Iraqi operations, including preparations for a campaign to retake the Anbar provincial capital of Ramadi, which Islamic State seized in May.

U.S. officials have pointed to more positive results from military support given to Kurdish peshmerga forces in Iraq as well as Syrian Kurdish fighters on parts of Syria’s border with Turkey. Another bright spot, they say, is progress made with local partners fighting the violent extremist group Boko Haram in west Africa.

However, in Afghanistan, the loss of Kunduz dealt another blow to Obama’s policy and raised questions whether Afghan forces will be able to secure the country on their own, despite the $65 billion invested by Washington to build them up.

Critics say a 2016 withdrawal plan may be premature.

Some analysts suggested that even though U.S. warplanes had begun bombing Taliban targets in an effort to take back Kunduz, the U.S. military may not have provided enough support early enough, particularly for airlifting in troops.

Even if Kunduz is recaptured from the Taliban, “the damage is done,” said James Dobbins, Obama’s former Special Representative for Afghanistan and Pakistan and now a senior fellow at the RAND Corp. think tank. “Everybody living there now knows they’re vulnerable.”