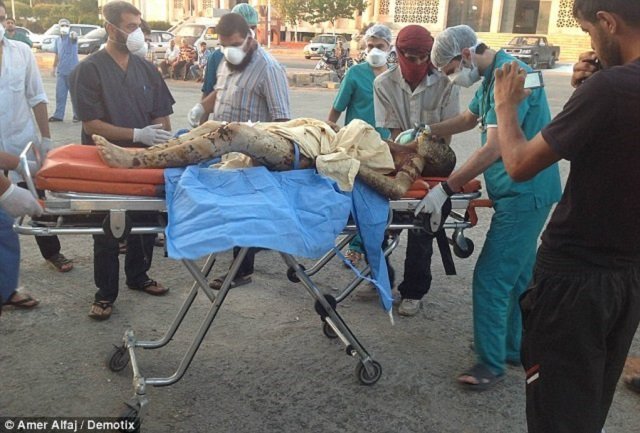 September 17, 2013 12:21 pm 0
Assad and Muslim Brotherhood: Both Claiming al-Qaeda in Syria
What Assad Is Forcing Orthodox Christians To Do
The Kurdish Cause vs. The Palestinian Cause

Bashar Assad may have pulled off the most successful use of chemical weapons in history. For the two years leading up to the Aug. 21 Damascus sarin gas attack, President Obama was saying that the Syrian dictator “must go.” No longer. In one month, Assad has risen from outlaw butcher to partner in disarmament.

America’s Syria policy today focuses not on mass murder, or on the metastasizing humanitarian and refugee crisis, or on combating the interests of Iran and its Hezbollah proxies in keeping Assad in power. Rather, with Russian President Vladimir Putin’s help, U.S. policy under President Obama is concentrating on chemical-weapons disarmament.

Secretary of State John Kerry labors to enlist Assad in an arms-control project even while alleging that the dictator has used nerve gas in violation of Syria’s obligations under the 1925 Geneva Protocol. U.S. policy is not to oust the Assad regime or even to encourage the Syrian people to do so. President Obama has now created a U.S. interest in preserving Assad in power.

This means Assad must stay, not go, for he is needed to negotiate and implement an arrangement to destroy Syria’s chemical weapons. The arrangement, if successfully negotiated, will take years to implement. Arms control evidently means never having to say you’re sorry.

Meanwhile, the Syrian rebels are exasperated and mistrustful, having seen Washington dangle the prospect of U.S. military strikes, only to back away. The Iranians are drawing comforting lessons about the lengths that the Obama administration will go to avoid military action in the Middle East. The Russians have been promoted from reprehensible accomplices in Assad’s evil to indispensable peace negotiators – while they remain accomplices to that evil.

What lesson will dictators around the world derive from all this? They will see that there is enormous utility in creating a chemical-weapons arsenal, and even in using such weapons. Sarin gas, VX, anthrax and the like can be valuable for intimidating one’s enemies, foreign and domestic, and for killing them. They can then be traded away at a very high price under the right circumstances. They can serve as a lifesaver for a dictator on the skids.

Clever dictators will realize that they can barter their chemical-weapons arsenals to buy time to crush an insurrection and then rebuild the arsenal after the population has been pacified.

This is what comes of focusing on what Mr. Obama legalistically calls the “international norms” barring chemical weapons use. By choosing not to tackle the difficult strategic and humanitarian challenges posed by the Syrian civil war, the president is now rewarding the very offenses that he said he wanted to punish. In the name of arms control, he is incentivizing the proliferation of chemical weapons. In the name of international law, he is undermining respect for treaties. In the name of U.S. interests, he is emboldening America’s enemies.

Bashar Assad must be blessing the sarin gas that killed all those men, women and children on Aug. 21. If he did order that attack, it was a master stroke. The victims of chemical weapons shake in agony. Assad, Vladimir Putin and Iran’s Ali Khamanei shake with laughter.

Mr. Feith, a senior fellow at the Hudson Institute, served 2001-05 as U.S. undersecretary of defense for policy.

Son, Prepare Your Children for War
The Syrian Refugee Football Assad is Scoring With
Give Syria a Chance
Assad Genocide 429 Slippery Barack Obama 976