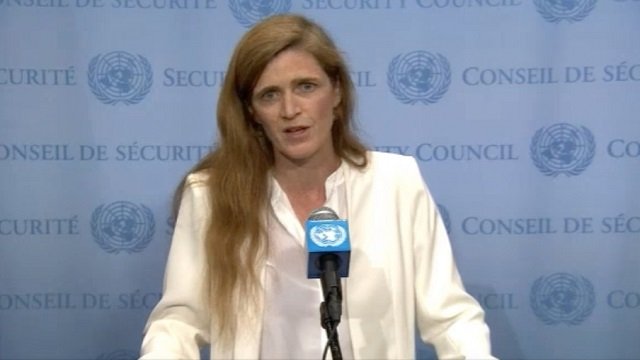 TFS Note: These U.S. strikes against the Assad regime forces are NO ACCIDENT. Russia was mocking the U.S. when it signed a peace deal to halt hostilities, yet permitted the Assad regime to continue its air strikes against civilians. Our president does not even have the balls to admit this one-time off strike, so he pretends it was an accident. By apologizing, Obama closed the door on more strikes, this means Assad will continue killing and gassing women and children as if nothing has happened. Does anyone understand this nuance at the WH? What a sorry ass story Obama has been. So weak and so wrong.

The U.S.-Russia deal to bring peace to Syria seemed near collapse late Saturday, as the two countries publicly accused each other of double-dealing and atrocities in the wake of an apparently mistaken U.S. airstrike that killed dozens of Syrian soldiers.

The U.S. Central Command acknowledged the strike, in eastern Syria’s Deir al-Zour province, saying it was “halted immediately” when U.S. forces were informed by Russia “that it was possible the personnel and vehicles targeted were part of the Syrian military.” Central Command said the intended target had been Islamic State forces in the area.

A U.S. Defense official said the strike “appears to be an intelligence failure.”

Russia and Syria asserted that 62 were killed and about 100 others were injured. Although the Central Command statement did not mention casualties, a senior administration official said the United States had “relayed our regret” through Russia “for the unintentional loss of life of Syrian forces fighting ISIL,” an acronym for the Islamic State, and had launched an internal investigation.

It marked the first time the United States has engaged the Syrian military since it began targeting the Islamic State in Syria and Iraq two years ago. The strike also came at a particularly sensitive time in U.S. and Russian efforts to forge a cease-fire in Syria’s civil war, as each has accused the other of failing to comply with an agreement they struck a week ago for a cease-fire, to be followed by coordination of their counterterrorism strikes.

The incident quickly sparked one of the most hostile diplomatic exchanges between Washington and Moscow in recent years. Russia, after calling an emergency Saturday night meeting of the U.N. Security Council, suggested that the strike was “not accidental” and that it was designed to derail the deal.

Russia’s U.N. ambassador, Vitaly Churkin, also said the strike could be evidence of U.S. support for the Islamic State and an al-Qaeda affiliate fighting the Syrian government, which the United States has sought to help oust. Both Russia and Syria said the Syrian forces at the time were engaged in combat with the militants, which then overran nearby areas.

Churkin spoke outside the Security Council chamber after his U.S. counterpart, Samantha Power, appeared before reporters as the meeting was starting, and scornfully called the closed-door session a Russian “stunt.”

The Syrian government, assisted by Russia, has tortured and bombed its people, Power said. “And, yet, in the face of none of these atrocities has Russia expressed outrage, nor has it demanded investigations, nor has it ever called for .?.?. an emergency meeting of the Security Council” on a Saturday night or any other night.

“Seriously?” she said. “And they’re calling this emergency meeting? Really? Because of a single airstrike .?.?. in error .?.?. which we have quickly called for investigating?” Power said. “Now, of all times, Russia calls for an emergency meeting, so it can stand up here and express outrage.”

Churkin, who stalked out of the meeting as Power entered, said that he had never, “in all my years in international life, over 40 years,” seen “such an extraordinary display of American heavy-handedness as we are witnessing today.”

Describing Power’s remarks as “demagoguery of the highest order,” Churkin said in an apparent reference to the U.S. electoral campaign that “it is extremely tragic that this is the state of political play in the United States.”

“It is quite significant, and frankly suspicious, that the United States chose to conduct this particular airstrike at this time,” Churkin said. “I would suggest it is not accidental that it happened just two days before the Russia-American arrangement was supposed to come into force.”

Over the past several days, the United States and Russia have exchanged charges of noncompliance with the cease-fire agreement reached in Geneva last weekend by Secretary of State John F. Kerry and Russian Foreign Minister Sergei Lavrov. The agreement calls for formation of a U.S.-Russia Joint Implementation Center to coordinate strikes against al-Qaeda and the Islamic State, once there have been seven consecutive days of reduced violence in the civil war and humanitarian aid has begun to flow to besieged communities in Syria.

Although violence has diminished, the United Nations has accused the Syrian government of failing to grant permission for safe passage of aid convoys.

Administration officials said Friday that it was increasingly clear that Moscow did not have the influence it thought it had over Syrian President Bashar al-Assad.

Moscow has countered that the United States has failed to separate opposition forces it supports from anti-Assad terrorist groups, particularly those of the former al-Qaeda militia, which recently changed its name from Jabhat al-Nusra to Jabhat Fatah al-Sham, or the Front for the Conquest of Syria.

Russia has been anxious for the coordination to begin. But Churkin, who said the agreement called for starting coordination on Monday, said the entire deal was now “a very big question mark.”

But, the official added, “we still think that despite” Saturday’s airstrike and the exchanges that followed, the agreement “is still worth pursuing, and we can still get there.”

Deir al-Zour, where the airstrike took place, is far from the populated western region where the separate civil war that is the subject of the cease-fire is focused. The Islamic State controls much of the province, although there are some scattered Syrian military installations.

The Central Command statement said that U.S. surveillance had been “tracking” an Islamic State fighting position “for a significant amount of time before the strike.” The Defense official, among several officials who spoke on the condition of anonymity to discuss the developing situation, said that the militants appeared to have a number of vehicles and a tank.

Coalition airstrikes against the Islamic State in Iraq and Syria are coordinated through U.S. military planning cells located in the Middle East. Target tracking is done through a variety of means, including aerial reconnaissance by surveillance drones and communications intercepts.

The Defense official said that before the strike was called off, U.S. forces had destroyed roughly six vehicles and the “personnel associated with them.­?.?.?. If we did get this wrong, which it looks like we did, it’s not something we intended to do,” the official said.

The Syrian military said in a statement that its troops had been surrounded by militant fighters and that the U.S. strike “paved the way for ISIS terrorists to attack” a nearby hilltop. In details the Pentagon did not confirm, it said the strike was carried out by four U.S. jets — two F-16 fighters and two A-10 ground-attack aircraft — flying from the Iraqi border.

The statement said the airstrikes were “conclusive evidence that the United States and its allies support ISIS and other terrorist organizations.” Churkin later said that Russian aircraft had gone to the area to assist the Syrians in repelling the militants.

Russia last year began its own airstrikes in Syria, primarily in support of Assad’s forces fighting the civil war, but also occasionally targeting the Islamic State. Last fall, the United States and Russia signed a “deconfliction” agreement to share enough information about where their planes were flying to keep them away from each other.

The Central Command statement said U.S. forces were not required, under the deconfliction agreement, to tell the Russians in advance about the planned strike, but did so out of “professional courtesy.” A senior official said the Russians had acknowledged the message but then came back to say that the strike was hitting Syrian forces.