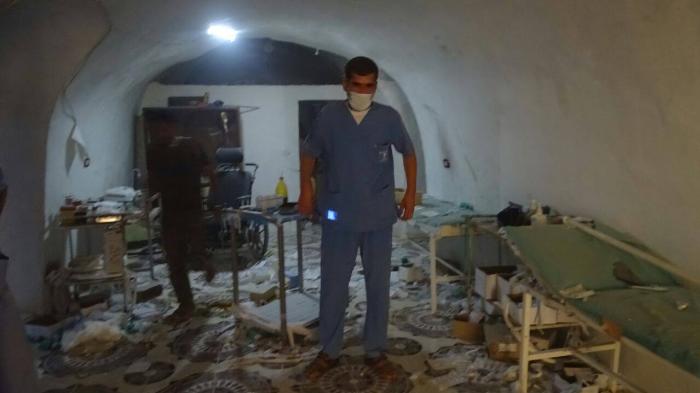 Latest attack on Idlib hospital left at least 12 people dead and comes less than two weeks after a US attack on Kunduz hospital, Afghanistan

At least three hospitals have been bombed by fighter jets in north-western Syria since Russiaâ€™s intervention in the war began in late September, doctors and international observers claim.

The latest attack, on Tuesday, killed at least 12 people at Sarmin hospital in Idlib province. At least three of the victims were believed to be medical staff. Survivors and witnesses said the hospital was hit by two airstrikes at about 1pm.

Dr Mohamed Tennari, director of Sarmin hospital, said the facility appeared to have been directly targeted and could no longer serve patients on one of the fiercest frontlines in the war.

He said the hospital had been the target of at least 10 other airstrikes earlier in the conflict. Throughout the war, international medical organisations have repeatedly claimed that medical facilities in opposition areas have been systematically targeted.

Physicians for Human Rights said it had documented 307 attacks on medical facilities and the deaths of 670 medical personnel in Syria since protests against the regime of Bashar al-Assad began in March 2011 until the end of August 2015. â€œSyrian government forces have been responsible for more than 90% of these attacks,â€ the organisation said. â€œEach of which constitutes a war crime.â€

The latest attack comes less than two weeks after a US attack on a hospital in Kunduz, Afghanistan, which killed at least 22 people â€“ 12 of them medical professionals and the rest patients. That attack was widely condemned and has forced an apology from senior US officials, as well as several international investigations.

Khaled Almilaji, the country director of Medical Relief in Syria, said: â€œThe whole world has to be just as angry as they were with what happened in Afghanistan. Their anger must not just be directed at Bashar, who has been inhuman with us, but also at the Russians, who are just as bad, but more accurate in their targeting.â€

Since early October, Russia has closed the airspace over north-western Syria as its air force has embarked on an extensive campaign to target the armed opposition to the Syrian leader. Airstrikes have been especially intense around Hama and Idlib, where some US- and Gulf-backed groups had been making gains against Syrian forces in recent months.

Russiaâ€™s claims that its attacks have targeted Isis have been at odds with evidence on the ground in areas that have have been heavily bombed but have no Isis presence.

Video shot during the attack shows massive explosions, then dust clouds and screams. â€œUntil now, 12 people have been killed,â€ said Dr Tennari, adding that another 20 had been injured. Among the dead were two hospital staff, who he named as physiotherapist Hassan Taj al Deen and a security guard Khaldoun Abu Din, both in their 20s.

In mid-March Sarmin hospital was the lead treatment centre in the aftermath of a massive chlorine attack. At the time Syrian regime helicopters dropped barrel bombs filled with chlorine, which left six dead and 50 injured and prompted further claims that Damascus had continued to use banned chemicals as instruments of war. Last month the hospital treated between 5,000-7,000 patients and undertook 100 surgeries, Tennari said.

â€œI think it was Russian,â€ he said. â€œWhen we were targeted by the Syrian regime airstrikes, it was different from this time.â€

The head of the Union of Syrian Medical Relief Organisations, Zedoun al-Zoubi, said Sarmin was one of three medical facilities targeted in the past week. The other two allegedly hit al-Harb and al-Eis clinics in Aleppo province. This month, a field clinic in Kfar Zeita in Idlib and another in Latamneh were also reportedly hit.

â€œIn the last three four weeks the airstrikes have become very accurate, very precise and very intense,â€ he said. â€œ(In the past) four weeks we know the situation has become really horrible and the number of displaced people are far more than before and we are talking about people who are used to war.â€

The director of programmes at Physicians for Human Rights, Widney Brown, said Russia was following in the footsteps of the Assad regime. â€œThese attacks are inexcusable. Claiming that the fight is against terrorists does not give any government the right to tear up the laws of war, which specifically protect health workers and facilities. With these actions, Russia is damaging hospitals, putting patients and medical staff at risk, and depriving civilians of life-saving access to healthcare.â€